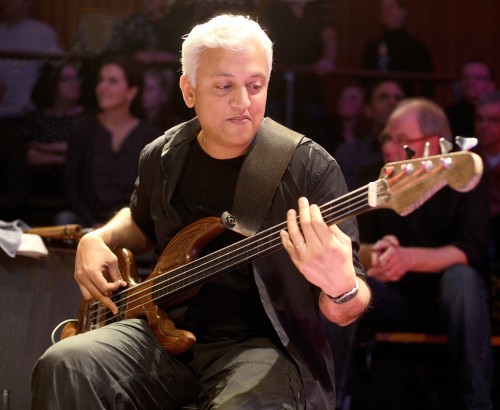 J-Night has a longstanding commitment to working with artists from diverse musical and cultural backgrounds. For Freedom Festival 2015 we’re very proud to present the first performance of a brand new collaboration that brings together the intoxicating rhythms of Indian music with the might of the British brass band:

‘JUST A VIBRATION’ is an exciting new music project that brings together two distinct and diverse musical forms: Indian music and the traditional brass band.

The musicians will perform ten brand new tracks that constitute Just A Vibration; all compositions have been created by Shri and arranged by Ben Castle. The Just A Vibration album is scheduled for release in November 2015, with Shri, Jasdeep and Marc performing with Hammonds Saltaire Brass Band at Rich Mix on 22nd November as part of London Jazz Festival. 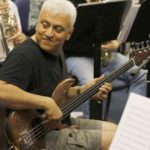 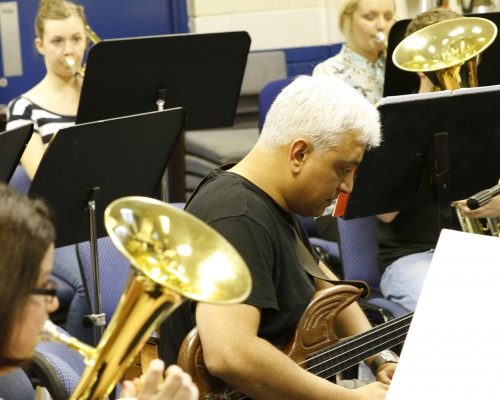 Shri Sriram with members of the Hammonds Saltaire Brass Band “It’s going to be amazing!” laughs the energetic Shri Sriram, who plays a bass guitar he built himself in 1991 and which he has used ever since. “I only started listening to brass bands recently and thought what an incredible sound they make and what fantastic music we could make together. I’ve always been fascinated with combining sounds and styles and since sound is just a vibration, I decided to turn that phrase into the title for this project.

“I’m using a music vocabulary created out of brass and Indian classical concepts which has its own syntax, pronunciation and accent,” continues Shri. “During the one hour performance one piece, for instance, is based on the tanpura, the four-stringed Indian drone instrument which is translated to the four-part harmony of brass, another based on a complex tabla piece called Chakradhar and some filmic Wagner/Bollywood style drama. The sitar seems to fit in very naturally as if it always belonged in a brass band, but I had to make sure neither the brass nor the sitar went too deep into its territory. That’s where it would become fusion in my opinion.”

Well known as one half of the highly successful UK drum & bass duo Badmarsh & Shri and for his ability to blend Indian and western musical styles, the largely self-taught Shri has devised a finely tuned sound that truly breaks boundaries. His musical passion and talent have driven him since he can remember: “When I was really little, growing up in India,” he remembers, “I would crawl up to the tablas that were in the house and start to play them; my father thought it was great and that I would grow up to be a classical Indian tabla player. But, when I went to college – to study chemistry – I was introduced to rock music – specifically Black Sabbath! – and as soon as I heard the boomboomboom of Geezer Butler’s bass guitar, I knew that was what I wanted to play.”

When the pioneering music curator and festival producer Simon Dove invited Shri to England to perform, Shri virtually blew the audience away with his formidable bass playing style, which broke every rule in the book. “I think they expected an Indian chap in traditional dress with a tabla and sitar and some kitsch Indian jazz but they got me in my jeans and my home made bass…”

Then along came Badmarsh & Shri; their debut album Dancing Drums (1998) contained a completely new mix of drum & bass, hip hop, Indian music and jazz. Their second album, Signs, delivered dancefloor fillers and led to their breakout performance at Glastonbury in 2002 which led to tours all over the UK, Europe, USA and beyond.

Since then Shri has been in constant demand as a performer, producer, composer – he wrote and performed the official promo song for the Indian release of Ang Lee’s Life of Pi (2012), has remixed work for artists as diverse as De La Soul, Andrew Lloyd Webber, and Kronos Quartet, has performed on Later With Jools Holland, at the Montreux and London Jazz Festivals and is currently composing the soundtrack for his third Indian film with Yashraj Films.

The premiere of Just a Vibration will be at 5:30pm on Saturday 5th September on the Yellow Bus stage at Freedom Festival Hull. Click on the link below to hear a 4-track sample of what’s in store. We can’t wait!